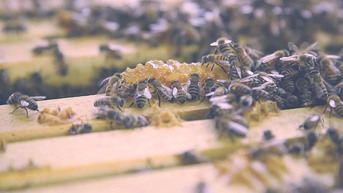 I always said if all else fails, I’d become a beekeeper. I remember the first time I said it, at 16, standing in Ananda’s back yard, in the green grass and bright sunshine and the house reflecting it in front of me. Ananda’s car parked on the lawn, the poor dog who he had run over by mistake once wanting to play, limping, looking to him for attention, excited there was company. Something about the Ardèche countryside was so soothing to me, like a balm. A moment of respite from the relentless expectations I set upon myself, constantly, tiredlessly, not pausing to celebrate a victory or achievement, but rather worrying that I had forsaken something else, that was just as important, or maybe more, maybe I had missed out, maybe I wasn’t seeking ardently enough for my true calling. And in Ardèche, life was all around me, effortlessly ignorant of my plans. The words couldn’t make their way to my mouth, the thoughts quieted before they could roar around like a hive of angry bees. If all else fails, I’ll become a bee-keeper, I said to myself. Somewhere up here, in the forest, in a little cabin, a farmstead, in peace. Peace. No one around, or very few. Just the trees and the fresh air, fellow farmers, hermits, companions. Engaged in simple actions that require nothing but honesty. No planning, no performing, no searching. No extras. No ambition other than authenticity, and that happening naturally. No fire, no drive, no stress, just the clean pursuit of daily chores that become so utterly fulfilling for being honest actions, actions without pretense, without grasping, actions that don’t “need” to be done, by some arbitrary measure, actions that call to be fulfilled. Simply. Honestly. For no other reason than to be completed. And out of that, the easeful union of being and doing, of actor and act, of service.