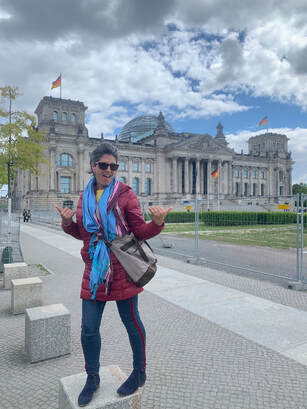 ​I am so pregnant, and this heat is stagnant. I’m sitting, watching a little
boy pretend fighting a monster, and i don’t know what to do. I just found
out i am having a boy. I don’t know how to deal with boys! I know tea
parties, dollhouses, silly giggles. I don’t understand these pew pew pews,
and gurgling sounds that are emanating from this small strange creature.
One of which is growing inside of me. I have tiny testicles, growing inside
of me. Right now! I know that i thought i didn’t care what the sex of my
child would be, but seeing this actual child in front of me... how am i
supposed to take care of one of those... It’s summer break from
Montessori. Water day. All the kids bring their swimsuits, and play in the
watery jumpy castles, and throw water balloons, and have a rip roaring
good time. It’s the second hot sunny day in a row, so i know Dominic is
excited. As the PTO president, I have to be here to organize the teacher’s
end of year party, so i have the opportunity to watch from behind, and
there he is. My little almost 5 year old, making grunting noises, and fighting
off the monsters that are just past my field of vision, and i reflect on a
summer not too long ago, and he is the cutest monster fighter i have ever
seen! He is everything i feared, and i love it, i love him, I want his world to
always be this perfect. Life is never perfect. In all of the fights with Noel, in
front of him, and all of the shit happening in the world, that i try to shield
him from, and all of my fear, anguish, anxiety about what is to come, which
even at his young age, i am sure he cannot help but see. I would do
anything to keep his world perfect. Futile, it is all futile. Trying to have a
conversation with a teenager is futile. I could not protect him from divorce.
I can not protect him from his angry father. I will not protect him from his
life. It is his life, and i have to trust that he has the tools necessary to live it.
I have to trust that my best has been good enough. And I feel like a
failure... All. The. Time. Then i forgive myself, because i have a fucking cool
kid. Who cares that he isn’t as social as i am? He has his friends. Who
cares that he doesn’t like the beach? He has his activities. Who cares that
life has thrown him curveballs? He would have to swing the bat either way.
Life isn’t perfect. I am not a perfect parent. He will not have a perfect life.
And when he lets me, i will catch him when he falls. That’s what parents
do. 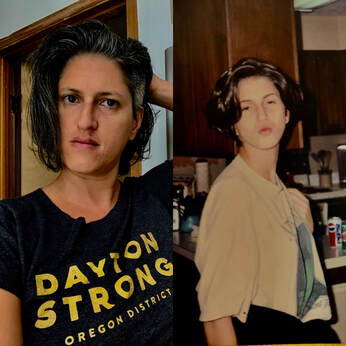 ​It’s decaying, much like my hope, much like this country, much like the bodies
after the bullets hit. I try to stay away from politics, I like living in my Maui
bubble, but this time was too close to home. By home, I mean my people. Then
again, what’s new. This country has been shitting on my people for years. I have
many times defined myself by my brown girl status. If someone didn’t know i
was brown, I made sure they did. If someone knew and didn’t like it, they could
go fuck themselves. If someone knew and praised me a little too much for it, I
made sure they knew I wasn’t some token Latina friend. I’m a genuine, real deal,
Puerto Rican that grew up in vanilla-ville, and was ostracized for it. I never
wanted vanilla-ville to get shot up.
The people that ostracized created that mess. White guys shoot up brown folks,
then cause fear in all the white folks that go on to fear the brown folks cause if
the brown folks weren’t there in the first place the white guy would have never
shot them up.
I grew up with several angry black men. My friend set used to joke about who
was playing the role of angry black man today. At least that anger was
warranted. We poked fun to keep the energy light. Because otherwise we would
all be angry. And yet, it’s the enraged white guys that are on their manifestos.
Even the crazy Latino man that was deluded in some sort of Stockholm
syndrome twist that made him plant bombs on the very politicians that were
trying to help. It’s all bullshit. And I am angry. And hopeless. And numb. I am
numb. I am numb. . .
I am numb to the numbers. Numb to the pain. Numb to the voices that want to
blame trannies and gay folks, a lack of prayer rather than a lack of morals, video
games instead of propaganda videos displayed for the incel masses that incite
fear and hatred... and somehow, I cannot hate these people. I have every right,
an yet i do not. I feel sorry for them. It’s the last thing they want, and I’m numb
to that too, but that‘s how I feel. Pity for the pathetic, angry, fearful, repugnant,
hateful little boys that were never taught how to deal with their feelings, because
boys don’t cry. Now I cry, I cry for those that lost family in a senseless act. I cry
for my friend whose nurse was shot, I cry for another city that is no longer
deemed safe, I cry for all the fear that these sad boys have created out of their
own fear. Boys don’t cry, so I cry for them. In their unempathic rage that hurt so
many, in their screams that come out as a rain of bullets, in their emotions that
they don’t know how to express, I cry for them. I cry for the sinners and I cry for
the saints. I cry because i am weary, and i cry for the weak. I cry until the tears
dry up and wash down the river, and then I cry again.
Powered by