The first letter that I ever received was written from a typewriter in Green ink at the St. Cloud State Penitentiary, addressed Dear Fred, written by my dad.  It was dated September 19, 1979, a couple of weeks before I was born.  I always felt sad for myself about the letter.  That it was the only time he reached out to me, that I didn't have a father who was available to me in any way, that he couldn't spell for shit.

It took until just now to put myself in my dad's prison issued shoes and held compassion up to the bullet proof glass divider.  I think he was something like 22.  Sold drugs to the wrong guy, ended up in prison writing to his not yet born daughter, Fred.  He cared about me enough to write me that one letter, that one time.  I don't recall ever being told that he got out.

After months, or years, or maybe just weeks of hearing my prayers, god bless mommy and daddy and everyone else in the whole wide world, my mom took me to meet him.  I was seven years old. Everything happened when I was seven.  Fuck, my son is days from being seven.  I met my dad when I was seven.  She took me to him. I was ushered through the basement apartment door.  The dank basement mixed with the smell of stale cigarette smoke filled my little nostrils . 2 strangers were perched in discomfort on the 70’s beige couch beneath two oversized macrame plant holders.

IT was dark, like basement with half windows in the middle of the day dark. With innocent confusion I turned to my mom and asked when we were going to meet my dad. That was the first time I remember getting embarrassed in a real, heart tightening way. With a few awkward laughs, I was told that my dad was right there on the couch.

I didn't recognize my dad. My dad had hair down past his ass. My dad didn't wear a shirt and did wear ultra short cutoff jean shorts. This guy…. He was smoking cigarettes like my dad always did in that picture, but that's it. This guy had short hair, was dressed in normal 80’s attire and didn't seem to be the least bit interested in me, his daughter Fred.  I had romanticized about that meeting and learned the trueness of disappointment instead.

I wish I know him. I'm afraid he’ll get into some crazy accident and die before I ever get to know him.  I wish i know that he loves me, that he is glad that i am alive, or even just if he likes me.

I wish I know how he felt, what he experienced in prison and if he ever had any real aspirations or dreams.  I wish I know what his favorite color is and what his concerns are.  I want to know more about how he was raised and what he wants for me. I wish i still had that letter. 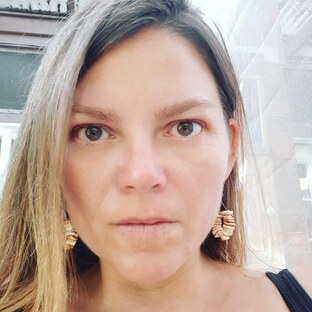 there is no energy available for me in this relationship.  I can see it as clear as I need to.  This is life times of trauma and all that ever needed to happen, was an agreed intention. Fuck,  that could have changed everything.  At any time. Except now. Now I can listen to my body. Now my body tells me the truth. Now my body shows me what's real beyond the pain. Now my body is awake, and now - Now it's too too late. The gold has slipped from between my fingers,  wet and tired and broken.  So tired, so broken, I could be wetter.  Always wetter.  What a shame.  He knew what to do.  He just had to put it down, and could not or would not. I know what I have to do and I can taste the clock ticking. Sweet and sour tick tock tick tock. This clock is too fucking loud! It hurts my eyes. It's too hard to tune it out and I can no longer wind it up.
I wonder if I'm bleeding on this chair. I'm in a short dress with no panties sitting on a chair at the bar - writing in blood. The bar keep thinks I'm classy. That's what he said. Then he thanked me for laughing at his joke. He's cute. My clock doesn't recognize him. He's not a danger. My danger is at home waiting for pizza with love and longing in his eyes for the first  time in way too long. I'm at the bar trying to find the words that will unlock my heart and set me free. The words are stuck deep down in my throat and its not as sexy as it could be.  There is nothing sexy about what I have to do. May there is. Honesty is sexy. I think it can be anyway. I need this to go well. it's going to feel like its coming out of left field. I think that's a baseball reference, that's not me. This is a fucked way to spend my last week in my 30's. A mother fuckin double-headed hate must while contemplating the breaking of my family! Happy birthday baby! Thanks Ivy! best day ever. Adulthood here I come. Fuck - it hurts and feels so fucking right. I hate this. I love this. This hates me. This loves me. It's all happening. It's all fucked up.  It's almost over. I'm almost ready. It's coming. I'm coming. I pray and I pray and I pray.

The End Of Sumer 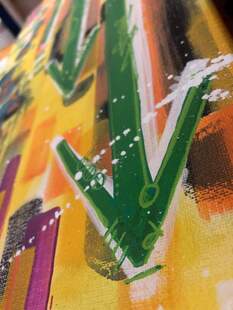 I landed in a perfect storm in the middle of a rainbow field when I was the color of static snow.  Of course my color is static snow.  I took the risk in order to gain the advantage. And sometimes that means showing up like that in a place like this. Where the building blocks are thoughts run a muck and there's nowhere to go but up, and then down,  so much further down.  All the way to and through the ground.
I swear I was up above it all. The depth surrounds and consumes the ones who got sucked in. In got sucked in. Fast.  I liked it. Shaking, shivering as the land pulsed beneath my receiving body of water. Fingertips write fire songs on my soul,  my soul quenches the thirst of the brush, strokes waiting to deliver craved balance. Catches light flowing down yellow rivers that carry energy back to the banks of rainbow fields, dissolves the static flow and fills in the spaces  - pillars sprout up and grow out into magnificent reflections of their creator, rewriting old stories in orange paint like it was the first time.
The secret language of bubbles dances on the tongues entwined in that familiar celebration of colour. Nothing makes sense taken out of context and the circles straighten me out,  just like they always have. And maybe I'm all messed up. Went left instead of right.  Then straight back to the center guided by the white arrows that know just how to bring me back- back to the front.  Back to the moment.  Back to the heartbeat beat beat. Shaken back to life. And then up up and away. The stories cross the help the suns set a hundred times in a hundred unknown ways.  These bits of land catch my feet walking in the directions of the medicine that carries and holds me.
The end of Sumer brightens the canvas,  making way for the fall of change to ignite the webs of creation... leaving behind the marks of renewal. The truth resides there, at the bottom of everything, above and below the layers upon layers of imagining, realizing and standing perfect and still in the middle of his rainbow field. 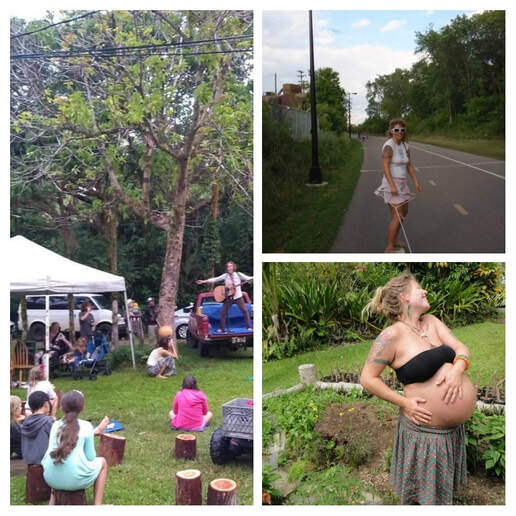 I don't think I could have gotten any bigger.  My round glorious belly almost always in my hands.  I loved being two people.  I learned how to skateboard that summer.  I wanted to show him I could be daring, exciting, fun.  I would tether to his bike and hold the rope through the city on her section 8 long board, weaving in and out of traffic in my pink mini skirt.  The orchids don't seem to mind the heat, neither do the bananas.  The one day it rained in the past two months was on my son's birthday.  We had an outdoor party in the rain and it was nice. it rained hard for a few minutes right before he started to crown.  Tina said it was babies blessing.  I believe it.  He survived.  He survived my body. He survived my mind.  I hope he can survive my traumas.  I hope I can.  I fell down hard on my board.  The day I decided to go down a grassy hill  - I stopped to think half way down and that's when I ate shit. My mind is constant in its betrayal.  I wanted him to stop me, to tell me it was a bad idea.  He was on his phone,  checking on the girl echo had just had his abortion.  My knee still throbs from the incision, from the uncertainty, all the instability.  I'm hard to deal with.  He tries,  but I think he'd rather not have to.  He wants simple and easy. I am neither of those things.  When I relax and trust,  I end up in a bronco passed out while the driver and his friend smoke meth the whole way back to the city in the middle of the night.  He doesn't do anything.  He just lets it happen.  We survived, I should be grateful.  I knew he loved me when my belly was full of him. Note the love feels obligatory.  Not simple.  Not easy.  That's not my lineage. My son changed me. Changed his own future.  He was born with a mouth full of shit and still survived.  He's forging his own path and I'm blessed as witness.  I stayed naked in the summer heat with my baby on my deflated belly for our first 40 days.  I sat by the fire and recounted the moments of his birth with him on my lap as he rounded his 7th cycle around the sun.  I feel his spirit in the wind on my face through my hair and past my skirt.  We all survive.
Powered by